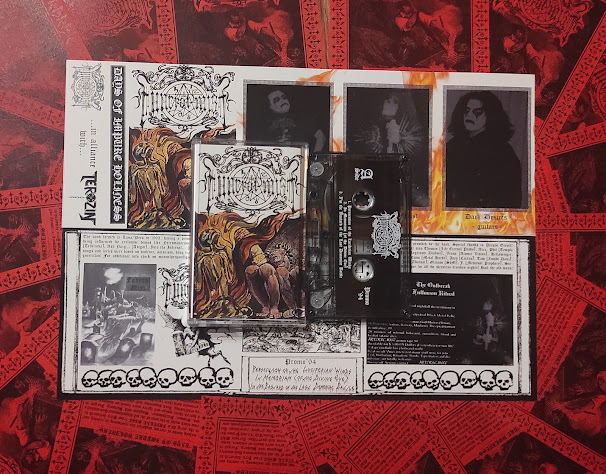 From unholy lands of eternal nightfall, the testimony is coming out! Back in the early 90's FUNERAL MIST from Peru delivered bizarre, raw black metal in the vein of the old blasphemous masters - Treblinka, Mayhem, Samael, Abigor and Bathory. Forged in fire and hatered, these songs and lyrics were based on violence, satanism, drug-trafficking, Inca paganism and guerrillas. Terozin M&T proudly presents both of their recordings (Demo/reh. '93 and Promo 94) on 100 compilation tapes, sourced from the original recordings before the band to transit into the legendary Illapa. Get in touch, shipping will start 17/1.

Terozin: terozin@abv.bg (some trades will be considered, you know who you are!)

Funeral Mist: manuelperqan@gmail.com (for the guys in South America - copies are already with the band) 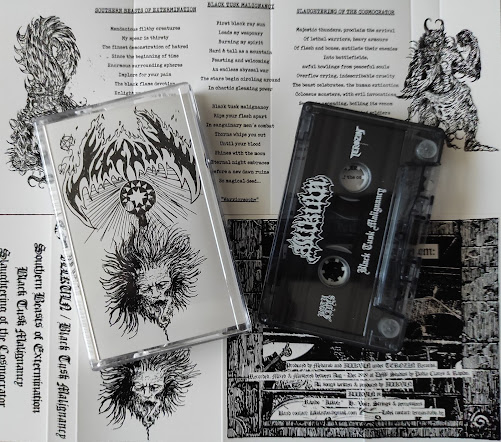 Celebrating 11 years since their first demo, ILLKULN from Chile spawns the 3rd offering called “Black Tusk Malignancy”. Consisting of 3 tracks, the spirit of ILLKULN is an echo from an ancient time, revealing tales about the occult forces of the Mapuche race and their spiritual and territorial war against christianity. These tales are channeled via primordial, savage black/death metal in the veins of the old Rotting Christ, Bathory and Celtic Frost. Released on 100 pro-cassettes by yours truly, Terozin Mag & Tapes. For the fellowmen in South America and Chile, please get in touch with the band for a copy to save on postage. Trades will be limited - you know who you are… 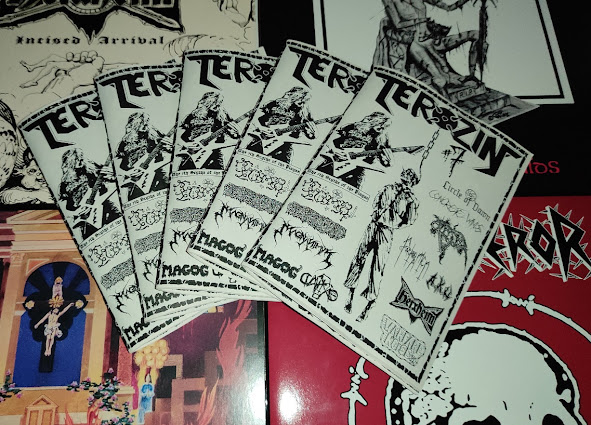 No fucken covid or nuclear bomb could stop the release of Terozin #7 - born in the land of mud, despair and poverty. Still ugly, disastrous and delayed it was printed in 200 copies to celebrate the primordial forms of the ancient metal cult. Besides AIDS, plague and gangrene on its 76 pages, you will find interrogation with the following criminals:

Price is 2 euros. Out 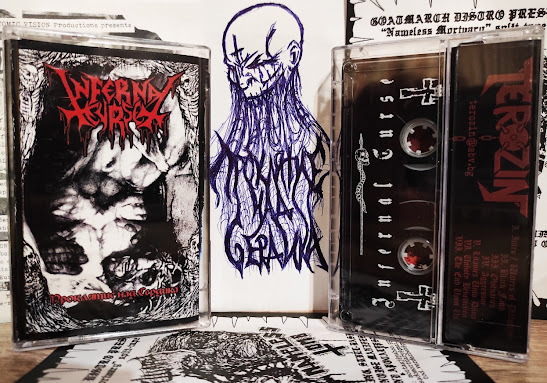 With this live recording, Infernal Curse celebrates 5 years after their curse took over the ruins of Sofia, Bulgaria on 10th of january 2016. Do not expect clean sound as this is crude, noisy recording, capturing the primordial essence of one of the most savage south-american acts these days. Comes on 100 pro-tapes via yours truly, Terozin Mag & Tapes. Price is 3 euros.

Trades for this tape will be limited.

In times of disease... PLAGUE is back! 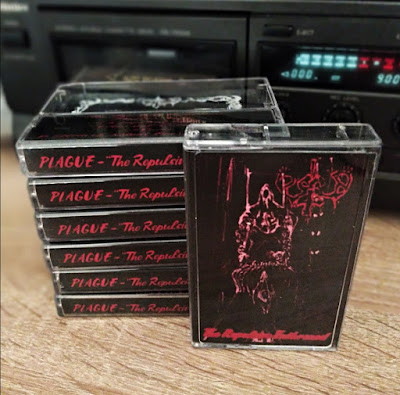 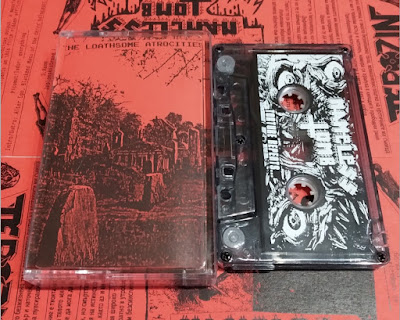 The Loathsome Atrocities of Robert Schmadtke and Monika M... a novel by Nameless Tomb

If you haven’t collided with this deviant act, come close and meet your miserable doom! Inspired by Nekromantik 2, Nameless Tomb from Germany delivers raw, antisocial deathnoise full of gore, stench and hateful visions. This 12-minutes demo tape is by far the noisiest and most gruesome release of Nameless Tomb so far and Terozin is proud to celebrate this collaboration with 100 cassettes.

5 tales of necrophilia, decadence and despair…

1. Intro
2. Abscheuliche Fantasien Eines Leichenschanders
3. The Lust and the Dead (Robert and Monika, a Gruesome Story of Love and Death)
4. I Wish I Could Kill You Again (You Fucking Kunt part III)
5. Outro

Taste the dead flesh and scream as the volume destroys your brain to tiny pieces:
https://www.youtube.com/watch?v=bYCiJphKX78 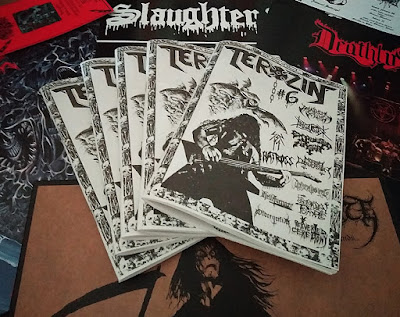 After few years of hiatus Terozin is back with a bang – unholy manuscript number 6, celebrating the raw and obscure forms of the metalnoise damnation. Despite some visual flaws and all the other troubles, this delayed, cut & paste creature came to life in 200 copies and on its decaying A5 pages you will find spits of evil from the following dwellers, deathmongers and antisocial outcasts:

Perverted Ceremony (BE) – black/death metal under the sign of moist, dirt and chainsaw sounds

Forbidden Temple (BE) – harsh, cold and evil black metal from the dark ages of plague

Price is 2 euros + postage to every corner of this dying world. Tapes and zines SHOULD be cheap! Shipping will start from april, due to being in Germany for “Braincrusher in Hell” festival

Copies en route to the following maniacs so far, more to follow: 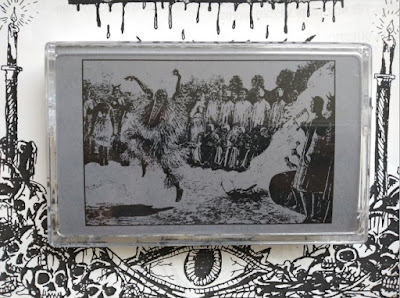 Recorded on one take at 6th of January, this 3rd rehearsal tape marks the return of Obrok from nothingness back to nothingness. Morbid voyage to the primitive oldschool black-doom mysticism the band has been known for. It is raw, crude music for worshippers of Xantotol, Black Crucifixion, most early Samael, the demos of Varathton...

Terozin mag & tapes puts a small quantity of 33 tapes and soon a fellow german label will release a compilation of all 3 rehearsals in wider limitation. So, no trades and purchases of multiple copies as the number is low on this one. For more details get in touch at: terozin@abv.bg 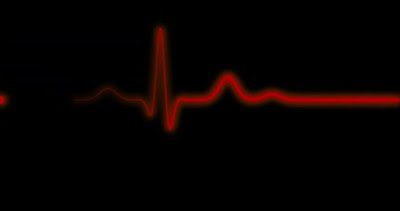 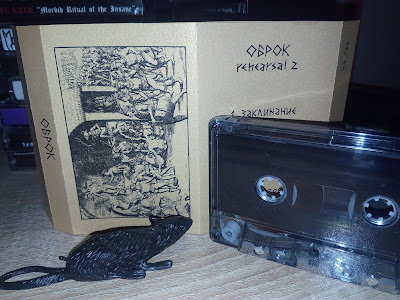 Created in solitude and frustration this small cassette edition marks the return of the primitive, oldschool black/doom mysticism… in total denial of all trends and modern recordings, the bands spewed these dismal sounds at one take on 7.8.2017. Expect obscurity in the vein of the ancient demos of Varathron, Hellhammer and Xantotol…  dusty… morbid… buried!

In conclusion: 2 disturbed individuals, 1 cassette recorder in the middle of the room, 5 caveman hymns on the 33 copies…